Diary of a Witcher : Part 1 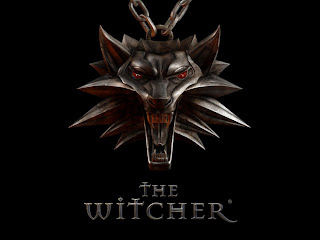 During the Steam summer sale, I purchased a copy of "The Witcher 2". I started playing it in Eyefinity on my PC but the frame rate was a bit poor and it really needs a gfx card upgrade to run sensibly. If I was on just one monitor I've no doubt my 7870 would laugh in the face of it, but a resolution of 5,760x1200 is just too much.

I want to hold off on upgrading until the new range of cards is released later in the year. As I've never played the original game I figured I'd play that first while I wait.

It runs on my three screens really well, although there is a bug which means the cut scenes only work if you turn the lighting down to basic. This isn't a disaster as it all still looks lovely. Being an older game I can get good frame rates too so everything is nice and smooth.

You play the game as Geralt, a Witcher. I'm still not 100% clear on what a Witcher is, though it seems to be something to do with slaying monsters. So far I've only played a couple of hours into the story, I've defended against a castle siege though the Salamandra (the bad guys) managed to escape with some mutagens. I've saved the life of Triss Merigold by creating a magic potion and then I slept with her. The next day we all split up to try and track down the Salamandra, I headed South and seem to be in a village called Vizima.

I visited an Inn and got chatting to one of the waitresses, she seemed hot. The next thing I know, she's outside being hassled by some bandits, so I killed them and walked her home. She told me to meet her in a barn the next night with some wine. That's as far as I've got up to now, I'm guessing if I do as she asks then I'll be getting lucky again! I'll let you know how that pans out next time.
Posted by Lufferov at 06:49